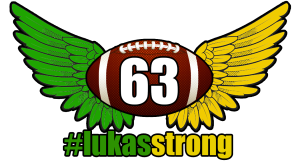 Lukas Benjamin Mason, age 13, of Oregon, passed away at St. Vincent Mercy Medical Center on Friday, June 12, 2020. Luke was born to Benjamin and Jodie (Schwierking) Mason on February 9, 2007. He was an eighth grader at Fassett Junior High School.

Lukas had a fun, confident, and larger than life personality that filled up every room he entered. His sense of humor, quick wit, and outgoing demeanor made it easy for him to make friends wherever he went.

On the field he was a fierce competitor and athletics were a huge part of his life. He was a phenomenal lineman and football player who chose to wear #63 in honor of his cousin who plays in the NFL. The football field is where he felt most at home. He was a big strong guy with agility that truly excelled on both sides of the line, playing center since the third grade on the offensive line, and led his team in sacks last year playing tackle on the defensive line. With his size and fearlessness he gave everything he had out on that field. He played football for Maumee Bay Turf and the Fassett Eagles. He also played soccer for the Oregon Crew, baseball for the Oregon Baseball Club, and wrestled for the Fassett Eagles. Luke’s coaches played an important role in his life. He especially had a close relationship with Eric Heintschel and Keith Kennedy who he truly loved like family members.

Lukas was incredibly smart and did very well in school. He was on the principal's list, he was an honors student, and a Presidential Award for Educational Excellence winner.

Lukas was incredibly funny. He never took himself too seriously and loved to laugh and make others laugh. He was bold and assertive and had no problem standing up for himself, but more importantly for others. He often protected and stood up for the little guy or the quiet guy and went to bat for his friends and family all the time.

Lukas was incredibly social and was never happier than hanging out with his numerous friends or gaming with them online. He loved to give everyone a unique nickname, usually having to do with food. He frequently called his friends names like chicken nugget, cheesecake, cheese waffle, dorito, along with diggity dog, and stinky. He rarely called his friends by their actual names. He had lots of friends but his closest, Mason Heintschel and Troy Hazuda held a special place in his life. They were the dream team on the football field and loved each other like brothers.

Lukas was a shining star to our family. A bright light that was a whirlwind of joy and laughter. His personality filled up a room and his smile was infectious. He was a great big brother and like a brother to his many younger cousins. He was affectionate and loving to his family and constantly gave out hugs and never forgot to say I love you or his favorite “I love your face” before he left or before bed. He was the best son we could have ever have hoped for and we feel incredibly lucky that we were blessed with him. We will miss him so much.

Lukas had a protective and generous spirit so it is no surprise that through his death others have been given a new chance at life. Lukas is a hero who donated seven of his organs and his family is comforted by the fact that his bright light and kindness will continue to live on in others.

Visitation will be held at Jerusalem Elementary School 535 S Yondota Rd. on Friday, June 19, 2020 from 2 until 8 p.m. A private funeral service will be held at St. Luke's Lutheran Church 20 S. Yondota Rd. on Saturday at 2 p.m. If you wish to support the Mason Family during the funeral service, a gathering will be held in the outside shelter house areas at church. The service will be livestreamed. Burial will be private at Oakwood Cemetery. Memorial contributions may be made to the Oregon City Schools Foundation c/o the Lukas Mason Memorial Scholarship. The family would like to extend of special thank you to the civilians who rushed to his side, first responders, the Life Connections team, Drew Schoviak, and the St Vincent’s Medical staff who cared for him with so much kindness and dignity, especially nurses Jean and Sky.